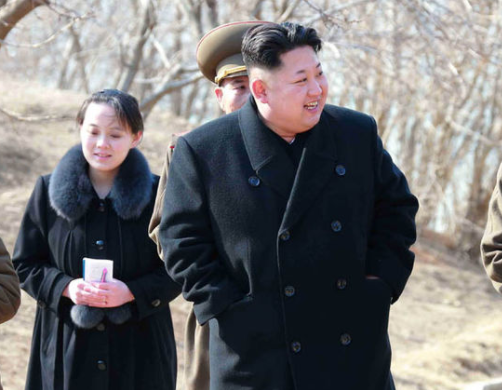 North Korean state media reports that its leader Kim Jong Un’s younger sister Kim Yo Jong was promoted on Saturday at a key meeting of the country’s ruling party
Kim Yo Jong’s profile has been rising since 2014, when she was made deputy director of the Propaganda and Agitation Department of the Workers’ Party. She and Kim Jong Un were born to the same mother, Ko Yong Hui.
According to NK Leadership Watch, she is a close aide of her brother “and since his accession manages his public events, itineraries and logistical needs, among other tasks.”
Kim Yo Jong was selected as an alternate member of the Political Bureau of the Central Committee of the Worker’s Party at the Second Plenum of the party’s 7th Central Committee.
Also in the reshuffle, according to state news agency KCNA, North Korean Foreign Minister Ri Yong Ho was selected as a member of the Politburo and Choe Ryong Hae, vice chairman of the Worker’s Party and a close aide to Kim Jong Un, was appointed to the party’s Central Military Commission.
Plugin Install : Subscribe Push Notification need OneSignal plugin to be installed.