Black Panther’ is fiction, but characters have a lot in common with these real-life people: T’Challa — Julius Nyerere – Mwanaharakati Mzalendo

Black Panther’ is fiction, but characters have a lot in common with these real-life people: T’Challa — Julius Nyerere 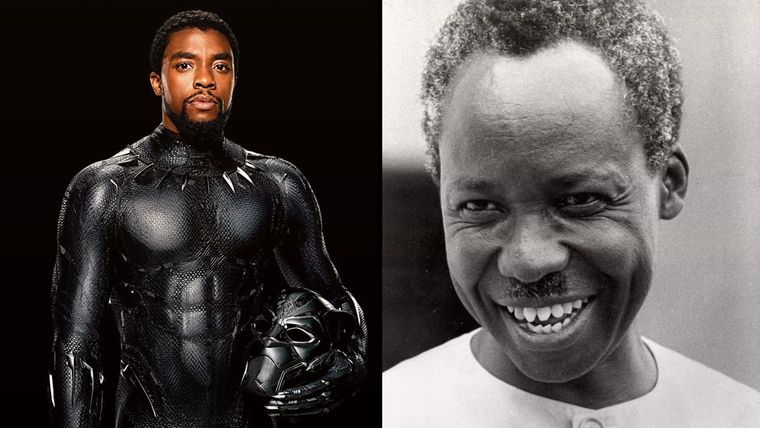 In T’Challa, actor Chadwick Boseman plays a classic hero role as the young, aspirational and reluctant ruler of Wakanda who assumes the thrown after his father’s assassination in a previous Marvel movie.

The superpowers bestowed to T’Challa from his country’s sacred heart-shaped herb and high-tech suit don’t make him anywhere near as strong as, say, the Hulk, but he doesn’t need the extra strength. T’Challa’s already worth more than $90 trillion and is easily the wealthiest character in any comic book, including Iron Man himself, Tony Stark, and DC Comics’ brooding billionaire Bruce Wayne, aka Batman. That hefty net worth comes from his country’s unlimited supply of the extremely rare and fictional precious metal, Vibranium (it’s the stuff used to make Captain America’s unbreakable shield).

With advanced degrees in physics, engineering and economics, T’Challa’s intelligence rivals the smartest people in the Marvel universe and, like Batman, he has mastered pretty much every martial art on the planet.

In his Wakandan homeland, however, the Black Panther selflessly rules a staunchly independent, hidden nation that’s based entirely on African tradition and culture. Carr said that sounds a lot like what the late president Julius Nyereretried to do when he helped found the east African nation of Tanzania in 1964.
The region formerly known as Tanganyika was previously colonized by Germany before the end of WWII. Afterward, the United Nations took control of the country and delegated sovereignty to the British.

Around that time, the Democratic ideals of the UN made colonialism a shameful geo-political taboo. Black and brown people around the globe more fiercely demanded their countries’ independence. Nyerere, then a political leader, was one of them.

He helped his country’s nationalists found the Tanganyika African National Union in 1954. He used his diplomatic skills to negotiate the union of Tanganyika and the neighboring island of Zanzibar to form the multi-racial republic now known as Tanzania.

Like T’Challa’s ancestors in Black Panther, Nyerere united the varying political factions of his nation to form one political party under the principle of “Ujamaa,” a form of socialism that translates to “familyhood” in English.

Unlike Wakanda, however, today Tanzania ranks among the world’s least developed countries, with rampant food instability and poverty, in addition to environmental and health challenges.

These problems stem largely from the country’s long history of political corruption, despite its founding dignitary’s esteemed international reputation for unquestionable integrity, according to Carr.

Unlike many post-colonial African leaders, Nyerere voluntarily ended his role as prime minister of Tanzania after 21 years in 1985. He died in 1999.
“The closest notion you may get for a real-life Wakanda today was what they tried to do in Tanzania,” Carr said. “Nyerere believed African culture had the answer to solve Africa’s political problems. He tried to make that real in a country. He was incorruptible. That’s the reason he was universally beloved.”

Read the full article at https://mic.com

A breakdown of everyone in that stacked ‘Black Panther’ cast