by I am Magnifico
in HABARI
0 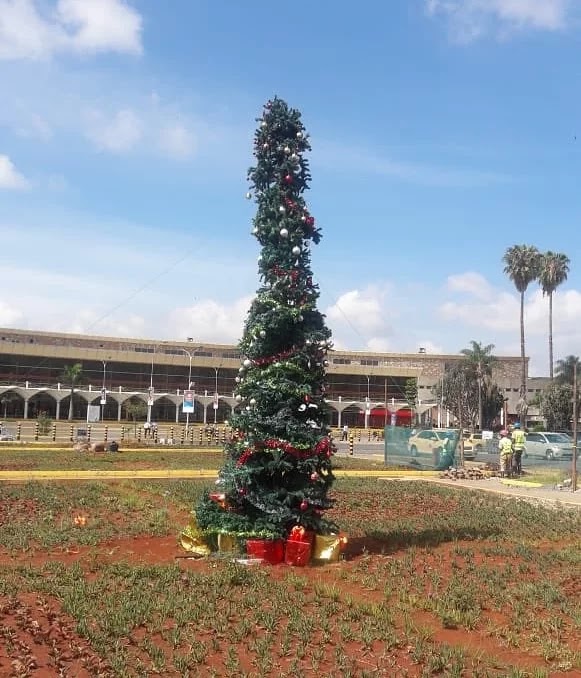 If you have been to the Jomo Kenyatta International Airport (JKIA) recently, you might have noticed a ‘unique’ tree at the centre of the parking lot.Dangling from the tree are sparsely placed Christmas decorations and boxes wrapped in red and gold underneath it.2.jpgKenyans online could not hide their resentment with some wondering how much the Kenya Airports Authority paid for the JKIA Christmas tree.Others questioned how JKIA, an international airport and among the busiest in East Africa, would have such a ’embarrassing’ tree as its Christmas symbol.Several Twitter users even insinuated that a tender for the tree was probably issued but funds misappropriated, in light of the recent corruption cases in the country.

“LMAOOO hio Christmas tree iko JKIA surely embarrassing us intentionally,” one Eva said.“Whose uncle or Aunty has eaten the tender for JKIA Christmas tree??” Tony asked.Kaberia wa Kaberia posed: “Someone to confirm how many millions have been used on this Christmas tree at JKIA!”Francis Hook however gave a suggestion on how to improve the tree saying: “A thing of ugly at JKIA. How to fix: – shorten & widen tree and place on a 2-3 foot high podium/platform. Deals with the issue of visibility – Podium will also protect the tree and “gifts” from muddy splashes when it rains (see the newly planted grass?)”“For an international airport, you can do better,” Duke of Gatanga said as Benter Owino posed: “Has someone really put up his/her greed and low standards on display at Jkia?”======UPDATESThe hideous JKIA Christmas tree that was the butt of jokes for Kenyans online has been replaced hours after it set social media abuzz.Airport workers were seen putting together the new JKIA Christmas tree on Wednesday night.There was however no statement from Kenya Airports Authority indicating why they had decided to make the change.A section of Kenyans who noticed the new tree took pictures and shared them online.

“Now a better Christmas Tree has been erected in JKIA. It seems that for anything to work in this country there must be some force. Now we will force a revolution,” Kaberia Jnr. added.Kenny Kaburu said: “Due to your huge outcry online over the emaciated Christmas tree at JKIA, it has now been replaced with a more bigger and fatter one. Social media always winning.”“That JKIA Christmas tree has been replaced with crazy speed! Lol,” Gituma Nturibi added.